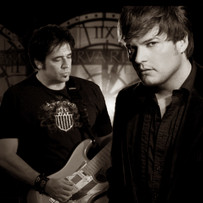 Born and raised near Atlanta, GA, this former college football player is known best for his extreme vocal range and versatility.  Having performed in many rock bands while growing up and strongly influenced by such vocal legends as Robert Plant, Steve Perry, John Farnham and Lou Gramm, Rob left music behind to study business and play football for the University of Georgia.  While messing around in the studio his final year at UGA, Rob recorded a song that was submitted to the Georgia Music Hall of Fame.  He was chosen as Georgia's New Talent Award Winner and was honored on a telecast with the likes of Gladys Knight and 38 Special.

After being passionately moved by a performance of Les Miserables at The Fox Theater in Atlanta, Rob decided to pursue his dream and move to New York.  Three months after moving, Rob was cast in Les Miserables on a national tour that would later bring him back to New York City for his Broadway debut.  On Broadway, Rob has starred in Les Miserables, Jekyll & Hyde, Dance of the Vampires, Little Shop of Horrors and Disney's Tarzan.

It was, also, on Broadway that Rob was able to connect back into his love for the world of rock music. Legendary composer and song writer Jim Steinman (Bat Out of Hell and Dance of the Vampires) and Grammy award-winning record producer Steve Rinkoff mentored Rob in and out of the studio, developing The Dream Engine, a band that featured both classic and new Steinman epics.

Through Jekyll & Hyde, Rob was introduced to songwriter, producer and founder of the Trans-Siberian Orchestra, Paul O'Neill.  Rob joined the platinum-selling rock band and first toured with TSO in 2001.  Rob is currently a member of TSO and can be heard on The Lost Christmas (Atlantic) and the upcoming release of Nightcastle (Atlantic).

(More info about Rob at: wikipedia.org)

Ianu's music is inspired by real life drama, his melodic guitar style being deeply rooted in violin playing. He studied classical violin for about 3 years before picking up the guitar and starting to write music, and has performed in a couple of original acts that enjoyed local success.

A few years ago, Ianu laid the foundation for a new music project. Later he would meet singer and songwriter Rodney Thomas, with whom he wrote many songs, some of which are included in the "Angels" album. In 2007, Trans-Siberian Orchestra vocalist, Rob Evan, joined the project and brought a new vision. Together, in 2008, they founded Menrva Realm.

Other than music, Ianu has a strong interest in visual art. You can see his artwork at mohai-art.com