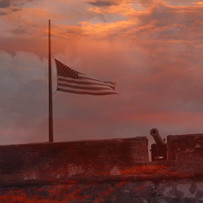 We feel humbled and honored to dedicate this song to all heroes who have sacrificed or are putting their lives at risk to serve the country and the great ideals of humanity.


tell me, momma, do you toss and turn all night,
thinking of the world and all it's crimes?
it leaves you paralyzed,
awake, but traumatized...
see you later, got to go to join the fight,
if you're scared, just look in my
crazed eyes, cold as stone,
cat's eyes, watch'em glow.